A new leaflet, Discover Dark Age Galloway, has been launched by the Galloway Picts Project, promoting many of the Dark Age sites that survive in Dumfries and Galloway.

Last year’s excavation revealed that Trusty Hill once very likely lay at the heart of the Dark Age Kingdom of Rheged, that was once pre-eminent amongst the kingdoms of the north during the late sixth century AD.

Rheged, for so long a lost kingdom, thought to be somewhere in South-west Scotland or North-west England, can now perhaps for the first time be fixed to the ground, not in Cumbria or Lancashire or Dumfriesshire, but in Galloway. For there is clear archaeological evidence now for pre-eminent secular and ecclesiastical sites in Galloway during the fifth to early seventh centuries AD, unmatched anywhere else in Scotland and Northern England.

It was in this kingdom, at Whithorn in the Machars and Kirkmadrine in the Rhinns, that Christianity and literacy is first apparent in Scotland. These sites, along with fortified strongholds like Mote of Mark near Rockcliffe and Trusty’s Hill itself, were well connected with continental Europe and the Eastern Mediterranean at a time when much of Britain was isolated, fragmented and barbaric.

The Discover Dark Age Galloway leaflet, produced by GUARD Archaeology for the Dumfriesshire and Galloway Natural History and Antiquarian Society, explains how this kingdom has been discovered in Galloway, and what happened to it.

The leaflet is free and is available from outlets across the region, such as the Mill of the Fleet, the Whithorn Story Visitor Centre, local museums and tourist information centres. 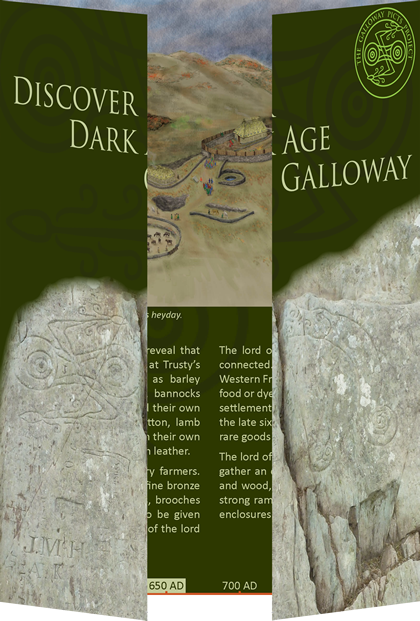