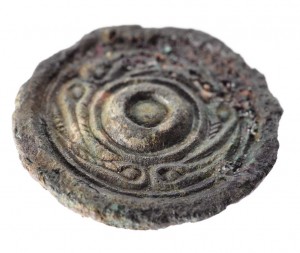 Further analysis of the Anglo-Saxon decorated horse mount reveals even more information about how it may have been acquired by the inhabitants of Trusty’s Hill. X-Ray Fluorescence analysis of the mount shows that it comprised of leaded brass with a higher concentration of zinc than found in either the crucibles or moulds from Trusty’s Hill. Leaded brass is more common in Anglo-Saxon England where Roman bronze objects (which were commonly composed of leaded brass) were melted down as a source material for metalworking. Despite the proximity of Trusty’s Hill to the Irish Sea trade networks that could have brought scrap metal to the site, the high lead contents in the crucibles and the lead ingot recovered from the site suggests that the craftsmen here were not re-casting either Roman or Anglo-Saxon metal, but using other sources to produce ornaments of leaded bronze not leaded brass. It seems unlikely therefore that the Trusty’s Hill mount was produced at the workshop at this site.

The Trusty’s Hill mount may have come to the site as part of a complete horse bridle or as an object already removed. There are various explanations: it could have been a gift to the household at Trusty’s Hill, it may have been traded to the smiths here or it may have been looted from a battlefield. Given the damage to the mount, that its gilded and silvered finish has been removed and that there is little other evidence for trade in scrap metal, the last explanation seems perhaps the most likely.