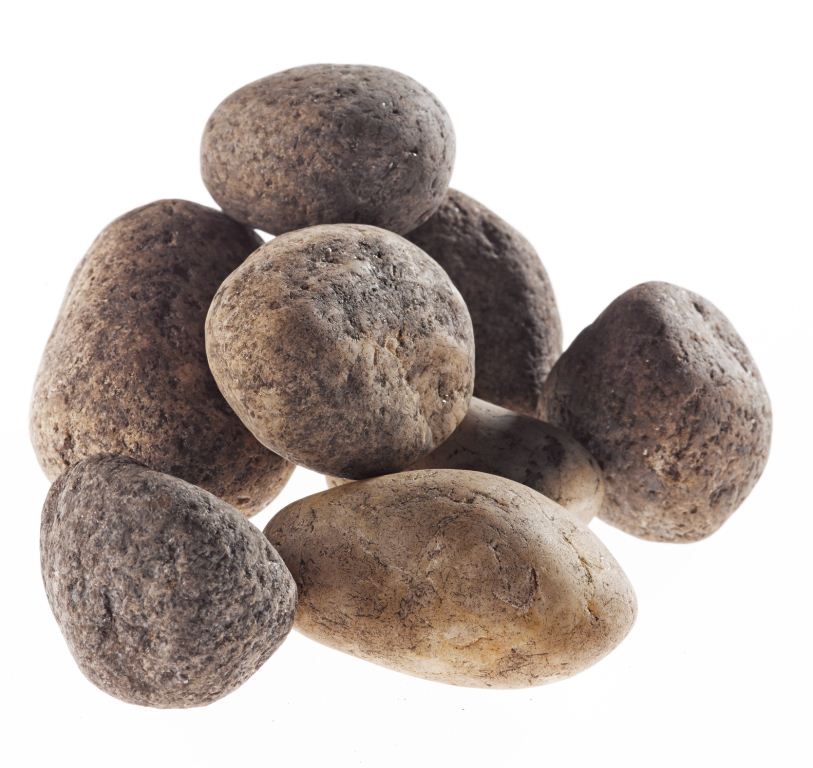 89 rounded stone pebbles, including 5 cobbles each over 200g in weight, were retrieved from both the eastern and western sides of the summit during the 2012 excavation. While just over half of these were found in two caches within the backfill from Charles Thomas’ excavations, the remainder were recovered from undisturbed deposits abutting the rampart, demonstrating that these originally derived from the early medieval occupation of the hillfort. In fact had Charles Thomas’ team not backfilled these stones together, these otherwise unworked stones would not have caught the attention of the 2012 team and would therefore have been discarded. One wonders if such stones have been ignored during the excavations of other hillforts in Scotland.

The geology of the stone is somewhat varied – mostly granite pebbles but also sandstone and quartz – indicating that the shape of the stones was perhaps more important than its type. The stones stick out from the fractured angular grey wacke stones used to construct the rampart in that they are very rounded and were deliberately collected from a nearby river bed.  They don’t naturally derive from this hilltop.

Perhaps the most important aspect of these stones is that the majority were found close to the interior side of the rampart on the eastern side of the summit, suggesting perhaps that they were gathered at this location close to the entranceway ready for use with a sling.

A flexible sling was probably one of the earliest weapons and one that was easiest to make with a strip of leather that held a round stone or pebble. In the south of England, slings were identified as defensive weapons at Iron age hillforts such as Danebury and Maiden Castle where huge numbers of slingstones were found in pits close to the rampart gateways; those from Danebury were as large and heavy as those from Trusty’s Hill.

The process of violent destruction that vitrified the rampart around the summit of Trusty’s Hill underlines the defensive nature of the early medieval settlement here. Together with the slingstones, this evidence testifies that there was a tangible threat to defend against.