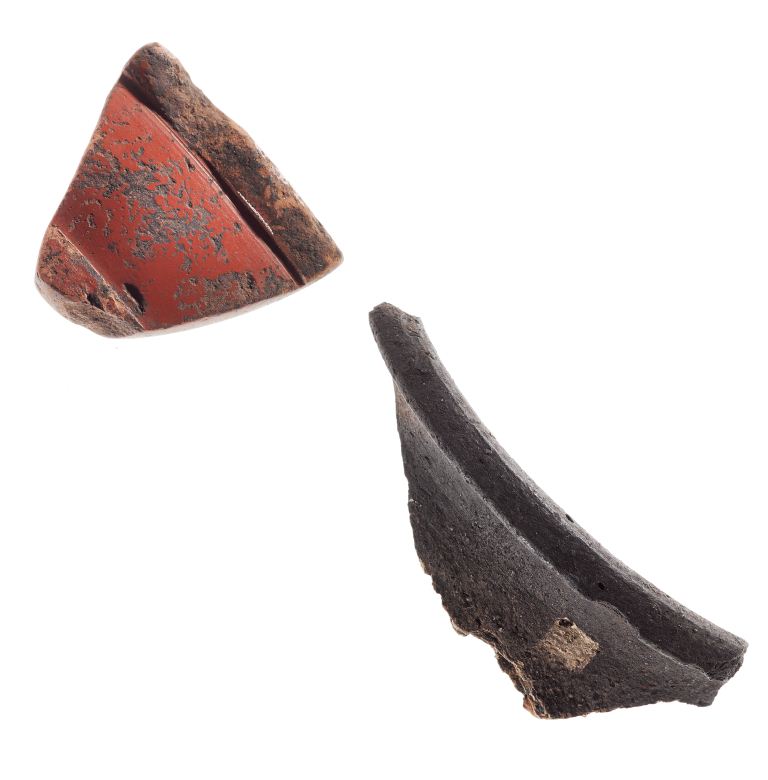 Alongside the evidence for high status craft working at Trusty’s Hill in the late sixth century AD, the 2012 excavations recovered two sherds of imported pottery – both from France – one a sherd of Roman samian ware and the other a later Merovingian sherd of E ware. Each sherd provides an echo of the status, identity and connectedness of the early medieval household at Trusty’s Hill. 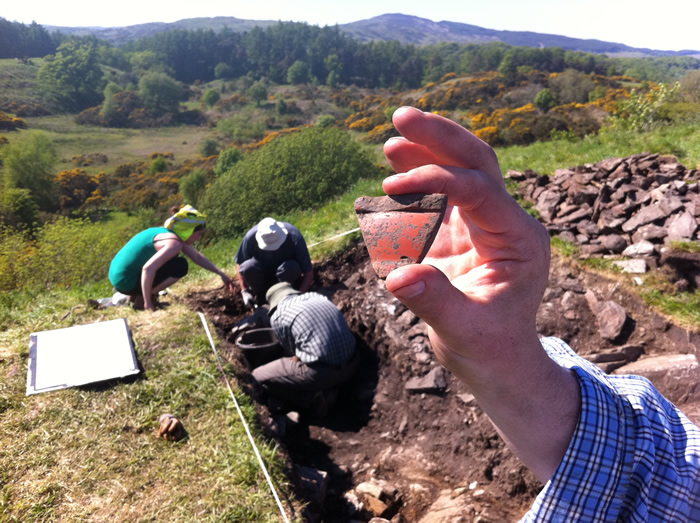 The Roman pottery sherd is part of a rim of a samian bowl, a type of expensive tableware dating to the second century AD. However, this was the only artefact from Trusty’s Hill dated to this period. Since the stratified context from which this was picked up – a layer of dark soil abutting the interior side of the rampart on the western side of the summit – yielded a calibrated radiocarbon date of AD 533-643, the deposition of this sherd clearly did not take place until at least the sixth century AD. The presence of a Roman pottery sherd in an early medieval context is not uncommon though, with Roman objects also being found at sites like the Mote of Mark and Dumbarton Rock. The samian sherd from the Mote of Mark is in fact quite a close example to Trusty’s Hill. It is similarly rubbed down on one side and both were very likely used as sources for jeweller’s rouge for polishing metalwork. The Roman pottery sherds from Trusty’s Hill and the Mote of Mark indicate active efforts by the Britons of the sixth century AD to import Roman pottery from elsewhere and reuse these in craft working on site.

The only other pottery sherd from the 2012 excavations, from an imported E ware pot from the Loire region of France, is a prime indicator of the status of the early medieval household of Trusty’s Hill. This single E ware sherd (albeit from excavation of only 1% of the site) suggests that the household here was part of an elite redistribution network that linked high status secular and ecclesiastical communities of Western Britain and Ireland with the Continent during the sixth and seventh centuries AD. Membership of this network allowed for the exchange of local goods for exotic imports (it was not the E ware pottery that was important but what the E ware pots contained). Perhaps more importantly for the society of the time, this enabled the gifting of these imports to kinsmen, friends and followers. While the evidence as it stands does not directly implicate Trusty’s Hill as an importation centre, key characteristics of the site (labour intensive defences, high status metalworking and metalwork itself) place the E ware sherd here in the same context as royal centres such as Dunadd, Dumbarton Rock and Dinas Powys. The single E ware sherd connects Trusty’s Hill with a continental trade that seems to have specifically targeted the north Solway Coast with large assemblages recovered from the large scale excavations at Whithorn and the Mote of Mark (in contrast to the absence of such imports in northern Wales, Cumbria and Lancashire). Gaulish merchants were clearly making a beeline for Galloway during the sixth and early seventh centuries AD, but what they were acquiring in return remains a mystery. 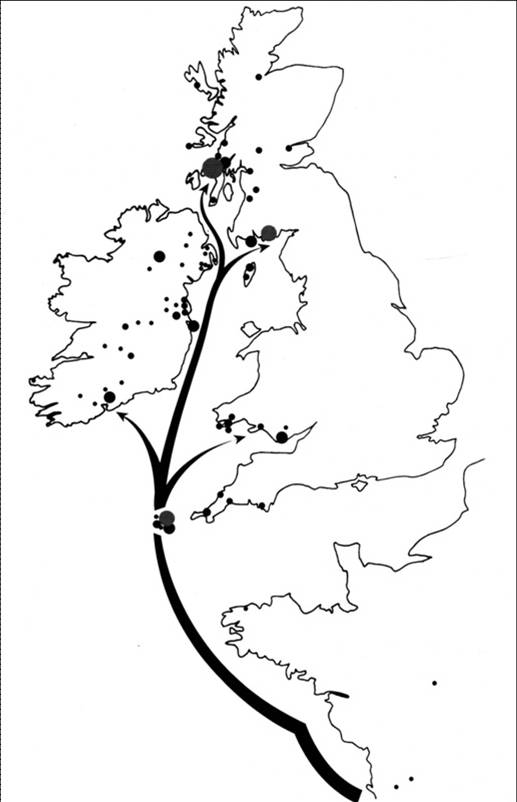