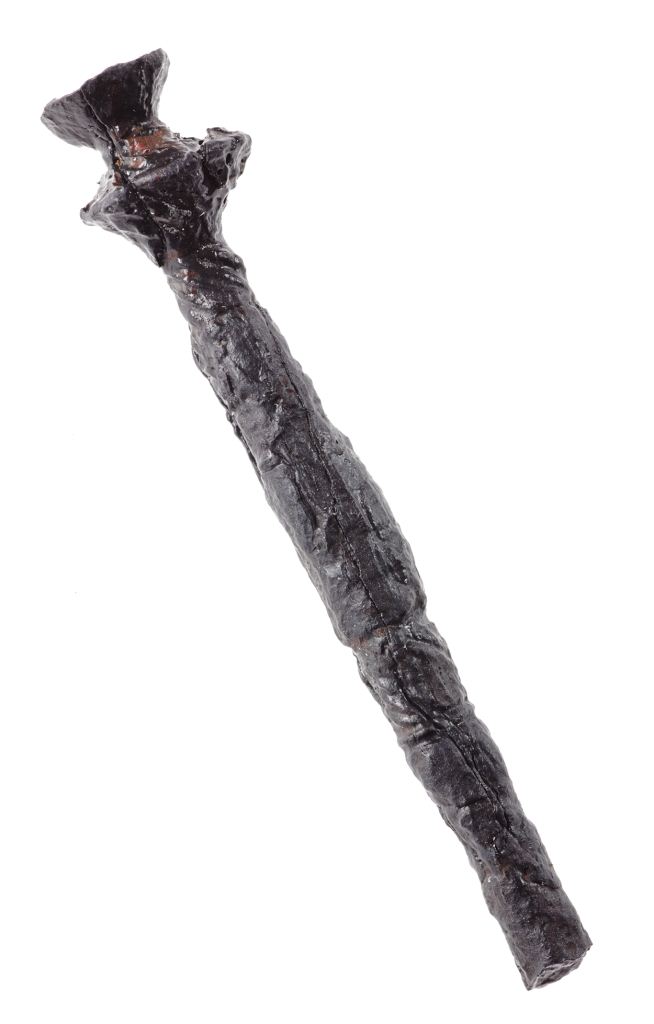 Along with the evidence for gold, silver, leaded bronze and iron working, Trusty’s Hill also produced a small but impressive assemblage of metal artefacts. The high quality of the ironwork assemblage in particular, especially given the small scale of excavations, is a good indication of the importance of the settlement here around AD 600.

Two of the metal artefacts really stood out.

The first was a decorative iron pin, recovered from the east side of the summit. It is of early medieval type and is a finely crafted thistle-headed pin. X-rays showed that there were traces of copper alloy inlay within the incised decoration. Decorated iron pins are rare, probably due to the difficulty in decorating iron compared to copper alloy or bone/ antler, which were easier to either cast or carve into intricate shapes. Hammering this small object into such a fine shape, incising the decoration and inlaying the copper alloy required an immense amount of skill as a metalworker and the owner of such an object is likely to have been of a high status. Thistle-headed pins can be paralleled elsewhere in Dumfries and Galloway, in bone from Tynron Doon and in a mould fragment for a copper alloy pin from the Mote of Mark. It is the rare choice of material, iron, which makes the Trusty’s Hill pin particularly special. The only comparably decorated iron pin from Scotland is a drum-headed pin from Howe in Orkney, which has copper alloy inlays on the head and incised decorative bands with inlays around the swollen shank. This form of pin has traditionally been dated on stylistic grounds to no earlier than the seventh century AD, though the Howe pin is from a context dating to between the fourth and seventh centuries AD, suggesting a longer currency.

The other impressive metal artefact was a circular copper-alloy mount, also recovered from the eastern side of the summit. It is decorated with Germanic style birds’ heads arranged around a central boss, with organic remains preserved on the reverse around three copper-alloy lugs, and can be dated to the late sixth to early seventh century AD on stylistic grounds. X-ray fluorescence analysis detected gold and silver on the front of this object, which was probably from a horse harness.

These two artefacts corroborate the radiocarbon dating evidence for occupation of the site around AD 600, and reveal that the inhabitants of Trusty’s Hill included people who had a considerable measure of wealth and sophisticated taste for expensive jewellery with which to ornament not just their own personal appearance but their horses as well. 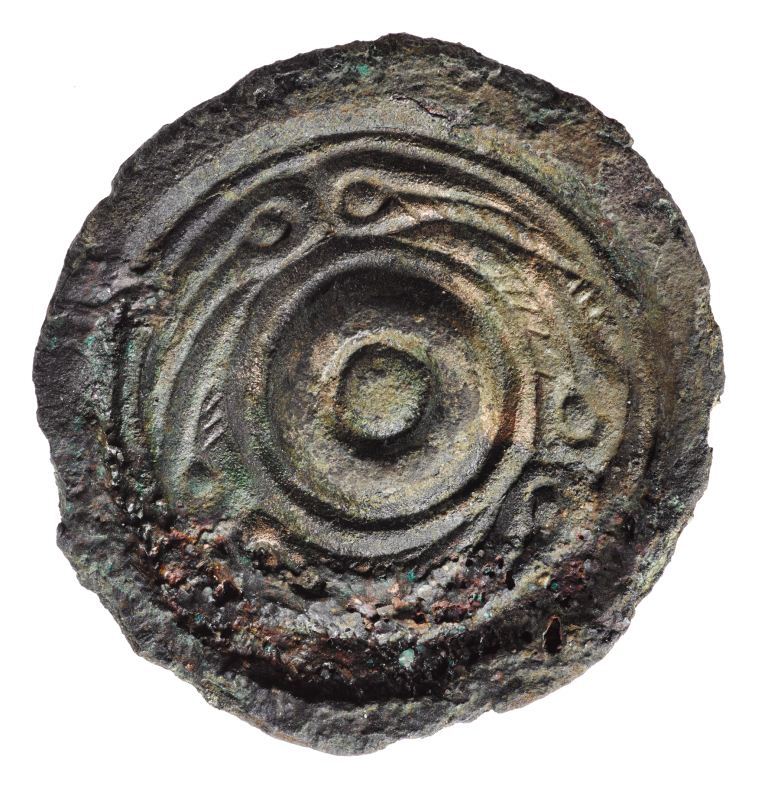