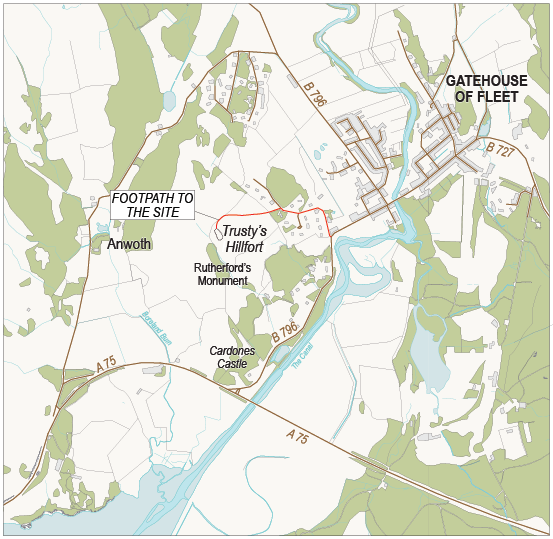 Ordnance Survey Map showing the location of Trusty’s Hill. Reproduced by permission of Ordnance Survey on behalf of the Controller of Her Majesty's Stationery Office. All rights reserved. Licence number 100050699. (Click to enlarge)

Trusty’s Hill is defined by a vitrified stone rampart around it summit, an outer bank and rock-cut ditch on its northern side and a series of lesser outer ramparts on its southern side. The Pictish symbols, comprising a double disc and Z-rod, and a ‘fish monster’ and ‘sword’, are carved on an exposed face of bedrock at the entrance to the fort. The site is of national significance and as a Scheduled Ancient Monument is protected by law. 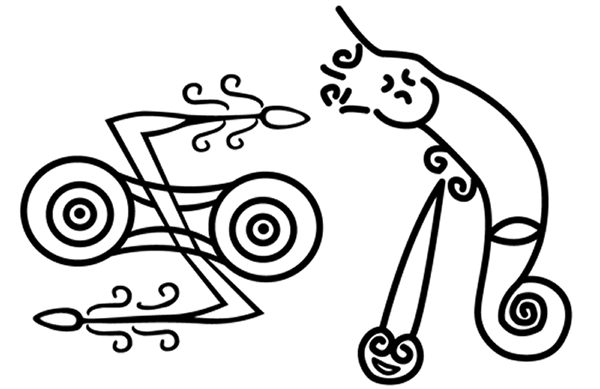 The site is located to the south-west of Gatehouse of Fleet, in the parish of Anwoth, in the Stewartry district of Dumfries and Galloway. The site is bounded on all sides by the Boreland Hills, an area of small hillocks, scrub and rough grazing for cattle and sheep.
The site is accessible via public footpaths from Gatehouse of Fleet and Anwoth. Access from Gatehouse of Fleet is via a small lane, Planetree Park, most easily reached by turning off the A75 at Cardoness Castle. The lane is on the left at the sharp right-hand bend before entering the town. Car parking is available approximately 100m further on at Venniehill car park on the right.
To reach Trusty’s Hill, a walk of about 1km (10-15 minutes) now follows (stout footwear recommended). Turn right out of the car park and take the road up on foot, keeping to the right. At the top, follow the public footpath sign into the field. Further on at a branching of the path, follow the sign to the left for Trusty’s Hill. Look out for the iron cage protecting the stones.

The stone walls of many hillforts in Scotland have been melted or fused together by heat. It has been discovered through excavation and experiment that such stone vitrification occurs when a timber-laced stone rampart is destroyed by being deliberately set alight. This process takes a long time and requires a great amount of wood. When the timber frame has been reduced to charcoal, however, the strength of the fire can rise to such a high temperature (900-1100°C) that the stone rubble within the inner core of the rampart melts. As it is unlikely that attackers would have sufficient time to build a fire sufficiently intense to produce vitrification, it has been surmised that the stone vitrification of ramparts was the result of the systematic destruction of a fort after it had been captured by an enemy and would have formed a spectacular if terrifying sight for miles around.

Trusty’s Hill Fort is a Scheduled Ancient Monument. This means that it is a monument of national importance, given legal protection under the Ancient Monuments and Archaeological Areas Act 1979. Activities such as excavations or metal detecting that may disturb the condition of Scheduled Ancient Monuments are illegal if they are undertaken without Scheduled Monument Consent. The prior written consent of Scottish Ministers is required for most works and any person carrying out unauthorised works or allowing unauthorised works to be carried out on a scheduled monument commits a criminal offence. Works on scheduled monuments should normally be the minimum necessary to conserve the important features of a monument.
After a lengthy period of consultation and discussions, which culminated in the submission of a detailed Research Design to Historic Scotland, the archaeological survey and excavation of Trusty’s Hill, to be undertaken for the Galloway Picts Project, was granted Scheduled Ancient Monument Consent.

Pictish symbols are found carved in monumental stones in Scotland, mostly north of the Clyde-Forth line, and on the eastern side of the country. These stones are the most visible remaining evidence of the Picts and are thought to date from the 6th to 9th centuries, a period during which the Picts became Christianized. There are about 350 surviving Pictish Stones, and the mysterious Pictish symbols, particularly from the earlier stones, have long intrigued scholars.
Pictish Stone distribution 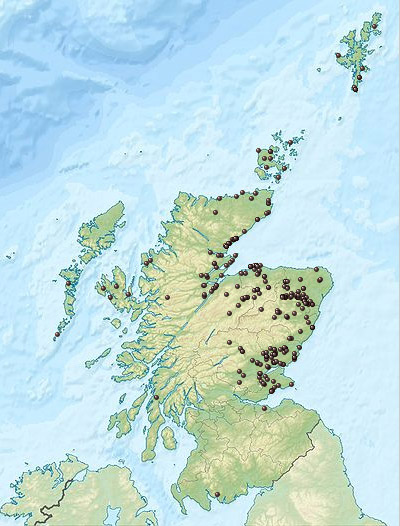