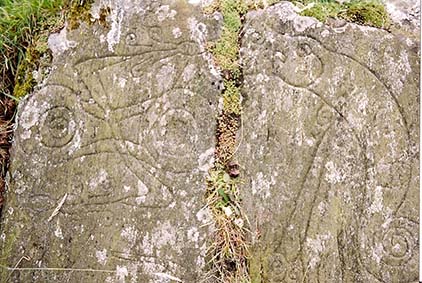 The principal question that the Galloway Picts Project sought to answer was: what are Pictish Carvings doing at Trusty’s Hill? Through examining the archaeological context for the carvings here, we think we have answered this question.

The excavation provides contextual evidence that firmly supports a date of around AD 600 for the carvings at Trusty’s Hill. Ultimately the literal meaning of the carvings here are unknowable but the wider meanings, such as the meaning behind their presence here at this precise location, can be understood from the archaeological context. Given the analogy with Dunadd in Argyll, both in terms of the location of the Pictish symbols (within a demarcated entranceway to the summit), the form of site (a nucleated fort) and the rich material culture (gold and silver working, jewellery production and continental imports), the symbols at Trusty’s Hill represent the paraphernalia of royal inauguration amongst the local Britons of Galloway.

Further analogies can be drawn with the location of Pictish carvings at other royal sites of this period in Scotland, such as Rhynie, Burghead and Edinburgh Castle Rock. Given the sheer number of Pictish carvings north of the Firth of Forth, it is unlikely that all Pictish carvings were associated with royal sites. But the symbols at these pre-eminent regional strongholds likely represent a shared sense of how to legitimise power in Scotland during the Dark Ages, when the cultural and political formation of this country was beginning to take shape and the notion of kingship in early medieval Scotland was being formed.

The full results of the Galloway Picts Project will be published by Oxbow Books in November 2016 in The Lost Dark Age Kingdom of Rheged: the Discovery of a Royal Stronghold at Trusty’s Hill, Galloway.