The Society of Antiquaries of Scotland Summer Excursion 2012 today included a visit to GUARD Archaeology’s Office and Finds Laboratory in Glasgow. Hot from the dig, the finds from Trusty’s Hill, excavated through the Galloway Picts Project (which was partly funded by the Society of Antiquaries of Scotland), were laid out for the Fellows of the Society to see. Dr Ewan Campbell, from the University of Glasgow’s Archaeology Department (and one of the academic referees for the Galloway Picts Project), was on hand to explain to the eleven visiting Fellows the significance of the artefacts and how these demonstrate that Trusty’s Hill was a royal site within early medieval Scotland. Thank you Ewan. 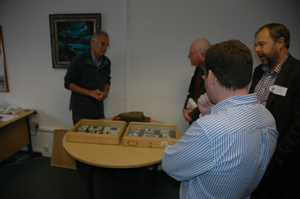 The finds from the excavation at Trusty’s Hill have now been safely delivered to GUARD Archaeology’s Storage and Laboratory in Glasgow. Staff were invited to a show-and-tell and they all seemed to appreciate what an interesting assemblage has been recovered through the Galloway Picts Project. The finds will now be processed by GUARD staff (cleaning and drying in most cases), before being sent to the various finds specialists for assessment. 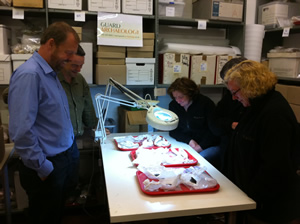 Day 14 of the Galloway Picts Project. The last day of the excavation. Iraia’s trench (the Well opposite the Pictish carvings) was the first to be backfilled by the Trusty’s Hill squad, as her team had completed recording all the archaeology encountered there yesterday. Next was Scott’s trench (the rock cut ditch) which was the deepest excavation on site. Once Beth and Ronan, with Kenny’s help, had completed the recording of archaeological contexts in trench 4 (the largest area uncovered) on the east side of the fort, the whole team mucked in to backfill this, while Chris hurriedly recorded, with Pat and Alison’s help, the last of the archaeological contexts in his trench on the west side of the summit of the fort. Time was ticking on when we started backfilling this last trench and we practically attacked its mountainous spoilheap. After the last turf was laid, we brought out a bottle of Fizz to celebrate a Great Dig. Today was a hard day, a seemingly unending slog of digging soil and throwing it back into the trenches we had spent so much time over the last two weeks carefully excavating. But this had to be done, to restore the site to the condition we found it. We have had such a hard-working team of volunteers for this dig, so many really nice people, and we are amazed and grateful for all their help and enthusiasm. 68 people volunteered to help us in all over the last two weeks, and we thank each and every one of them, as without them we could not have discovered what an important site Trusty’s Hill was in Dark Age Scotland. Ronan & Chris 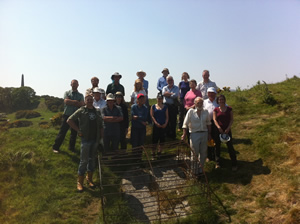 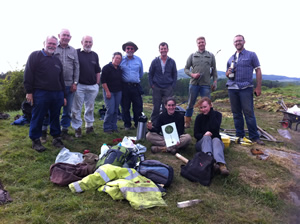 Day 13 of the Galloway Picts Project. Another day of glorious weather on top of the hill but the last day of excavating, and everyone is feeling a little sad that the excavation has drawn to an end. We are all so pleased though, that it has turned out so well, with so much discovered. In the last few days we found another pottery sherd, identified as 7th century E-Ware from Gaul, which is further evidence that Trusty’s Hillfort was an important site in Dark Age Scotland. We have also found crucible fragments, evidence of high quality metalworking on the site, and decorative metalwork itself, in the form of two iron pins and a possible Anglo-Saxon Disc Brooch. The most exciting finds today were a fragment of a mould, the cruciate design on it very clear, and what we think may be a bear claw! There have been many visitors to the site, including an MSP, and it was wonderful to be able to share with them the pleasure and pride, felt by all the volunteers, at what we have discovered about this enigmatic site. Francis 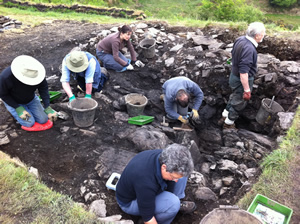 Day 12 of the Galloway Picts Project. The day was started off by a tour of the site and we discovered the mystery of the Pictish Symbols here in Galloway, then we went straight into drawing a rock. However the highlight of the day was digging a hole, even though we were exceptionally disappointed that we never uncovered anything that remotely resembled a dead body. All in all we had a thoroughly good time and we all learned a little more about archaeology and soil. Caera, Christie, Beth and the boys. 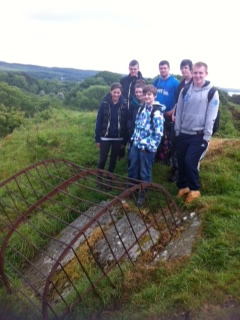 Day 11 of the Galloway Picts Project. This is my third day at the dig as a volunteer. Today I was on punishment duty in the ditch – my fault for coming late! I’ve not been on a dig before, so the amount of heavy labour these guys do has been really surprising – and impressive. We’ve dug down about 5 feet and are only now hitting bedrock. No finds in the ditch yet, but it’s been great fun working with such a nice bunch of people. Karen 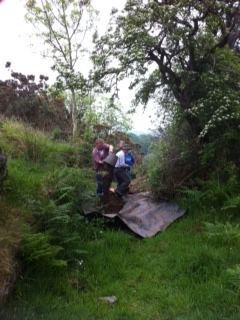 Day 10 of the Galloway Picts Project. A new and fresh day started at the top of the hill. The day started well by opening up Trench 6 with the use of mattocks, spades and lots of volunteer workers. This was hot and heavy work which was rewarded after lunch with further excavating Trench 4 where there was bounty to be found. This was largely in the form of animal bones and charcoal but did include a flint tool and some metalworking debris. From a volunteer perspective it’s certainly a wonderful experience and lots to learn. Pat

Day 9 of the Galloway Picts Project. Today was spent digging the well at the entrance to the fort. I was digging out what appeared to be two walls and a passage leading to the well. We found a fossil in one of the stones here. The most significant find was wood in the well, also well-preserved hazelnut shells! The sun was scorching on the head, as usual now, but mercy came in the form of the occasional breeze, most welcome as we toiled. Nigel 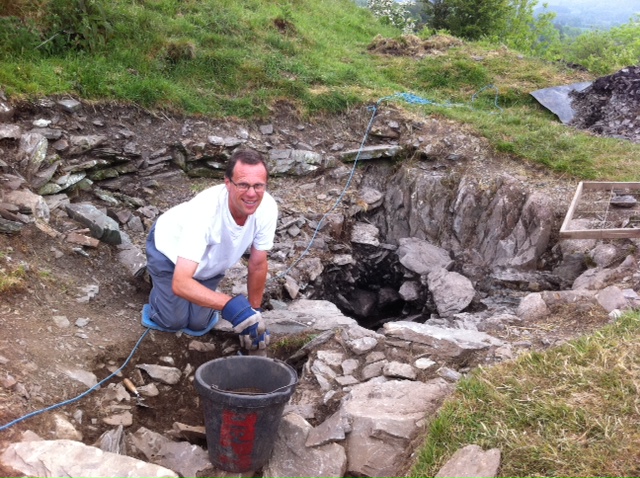 Day 8 of the Galloway Picts Project. Another sunny day at Trusty’s Hill and more visitors seeing the working progress, rolling their sleeves and getting into the groove of archaeology! We had a couple of new volunteers from the Czech Republic today. Excavation of the Well, which was carved through bedrock, still looks very promising but there still work to do. We need to get to the bottom! But at this moment it seems a bottomless well! Iraia 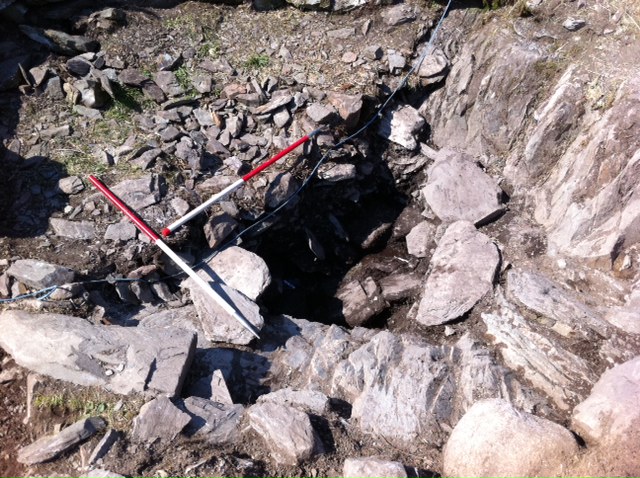 Day 7 of the Galloway Picts Project. Arriving at a site and not knowing what to expect is one of the wonders of archaeology. Trusty’s Hill was no different revealing a serious amount of stonework. The sampling of the vitrified ramparts for archaeomagnetic dating will provide a clear answer on the date that the rampart was set on fire. Sam 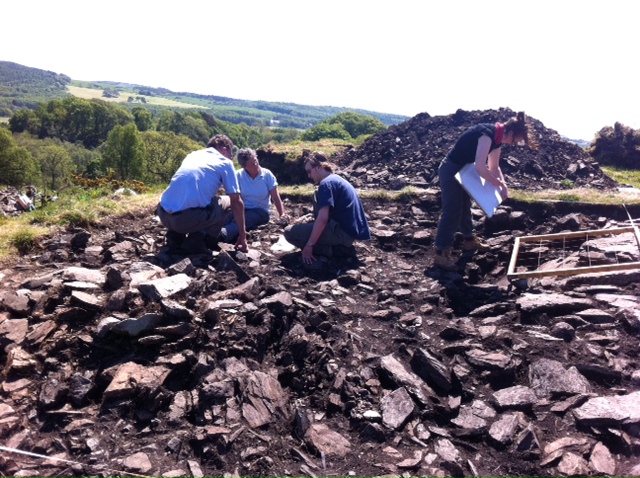